Bentley MotorsPublished on 03 Jun 2020Last Edited on 23 Jan 2021Written by Dr Jiulin Teng
Keywords: bentleyfull-sizehistoryluxury-carrolls-roycesedanv8
Bentley has completed the final example of the iconic 6¾-litre V8 engine in Crewe. The L-Series V8 engine holds the record of the longest serving V8 in continuous production. The final example was assembled in Crewe, England by a group of seven Bentley engineers on 1 June 2020 Bentley has ended the production of the 6.75-litre V8 engine

The development of the first Bentley V8 began soon after the company moved to its current location in Crewe. In the early 1950s, Jack Phillips, Senior Engine Designer, was tasked with planning for a replacement for the six-cylinder engine of the time. Bentley wanted an engine at least 50% more powerful that could fit into the same space under the hood with no increase in weight—making the V8 configuration an obvious choice. The engine ran just 18 months after the start of the design process.
The resulting 6.2-litre V8 was 30 lbs lighter than the I6 that it replaced. It debuted with the Bentley S2 in 1959, producing an "adequate" 180 bhp. In 1971, the displacement was increased to 6.75 or 6¾-litres by increasing the bore from 3.6 to 3.9 inches.
During continuous production, the L-Series V8 was continually updated: In 1980, a collapsible water pump was employed, shortening the engine by four inches. The launch of the original Mulsanne Turbo, which required the fitment of a single large turbocharger, required significant charges. It was the first forced-induction Bentley since the Blower Bentley of the 1920s. The design evolved to a twin-turbo setup with fuel injection and electronic control during production. The same V8 engine has powered full-size Bentley sedans for over six decades
For the launch of the new Mulsanne in 2010, the V8 underwent a major update that included a new crankshaft, new pistons, new connecting rods, and a new cylinder head that supports variable valve timing and cylinder deactivation. The torque of the 6¾-litre V8 peaked at 1100 Nm, at a time the highest in the world. Nevertheless, it produced 99% fewer harmful emissions than its forebear.
Over 61 years, exactly 36,000 L-Series V8s have been crafted by hand in the engine workshops of Bentley's Crewe headquarters. In the final days, it still took 15 hours to build, and key internal components are chosen from a matching, balanced set. As it has been for decades, the finished example is topped with a plate denoting the engine specialist who signed off on the tested example.
The final example will power the 30th and last specially-commissioned Mulsanne 6.75 Edition by Mulliner.
For more story about the history of the big Bentleys, please read this article on the legend from the very first Bentley 3 Litre to the Current Mulsanne.

As predicted in our previous article, Bentleys going forward will be powered by Volkswagen W12, V8, and V6 Hybrid drivetrains. The latter marks the start of Bentley's journey to electrification, first found in Bentayga Hybrid. The newly-launched Flying Spur will receive a hybrid powertrain by 2023. 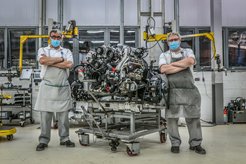 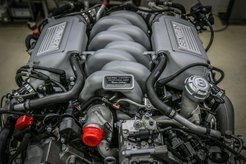 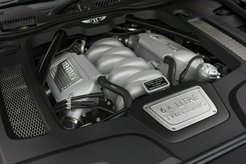 The Bentley Continental GT is the 3rd iteration of one of the world's most popular luxury GTs. Built on Volkswagen Group's MSB platform, its sporting capabilities and refinements have been vastly improved over the previous generation.
Compare
NEX score 87%

Built on Volkswagen Group's MSB platform, the 3rd gen Flying Spur is decidedly more sporty and refined. It debuts with all-wheel steering and Dynamic Ride as well as a range of the latest luxury features and technologies that Bentley has to offer. ...
Compare
Neoscore 71%NEX score 83%

Bentayga combines ultimate luxury with sporting ability and everyday usability. Available in W12 and V8 petrol, V8 diesel, and V6 PHEV variants, the crossover handcrafted in Crewe is as configurable as it is capable. Sharing the MLB platform with the s...
Compare
Neoscore 82%NEX score 70%

Bentley Mulsanne II facelift is an ultra-luxury full-size sedan in production from 2016 to 2020. It is available with a twin-turbocharged V8 engine that displaces 6.75L.This venerable OHV V8 can trace its heritage to the 1960s. While its 14.6L/100km (1...
Compare
Neoscore 63%NEX score 84%
Ads: Support our work by making purchase on the following sites. As affiliate of these vendors, we may receive a commission if you make a purchase with these links.
AmazoneBayAdoramaHP