Understanding the World's First Compression-Ignition Gasoline Engine—Mazda Skyactiv-X: What Makes It Special? Why Do We Care?

How Does Skyactiv-X Work?

In a gasoline engine, the fuel-air mixture is traditionally ignited by a spark from the spark plug. In a diesel engine, the fuel-air mixture is compressed, and the heat and pressure created from the compression ignites the mixture without the need of a spark.
This difference leads to a key difference between the two types of engines: Diesel engines by design have much higher compression ratio than gasoline engines, which need lower compression ratio to prevent detonation. At the same time, compression ratio is a key factor in determining the efficiency of an internal combustion engine. Why Should We Care?

According to Mazda, the 2.0L Skyactiv-X delivers at least 10% more torque than current generation gasoline engines. Further, because the throttle is open most of the time, it exhibits the quick response characteristics of diesel engines (which are never throttled). At the same time, Skyactiv-X spins up to the higher rpm range as smoothly as typical gasoline engines.

Mazda's testing shows that the 2.0L Skyactiv-X delivers 20% improvement in fuel economy compared to current generation gasoline engines. In areas where load is consistently low, fuel economy can improve up to 30% thanks to super lean combustion. In fact, Skyactiv-X even equals or exceeds Mazda's latest Skyactiv-D diesel engine in fuel efficiency.
Because this technology is extraordinary in fuel efficiency at low loads, even greater improvements may be observed with large displacement engines.
Essentially, Skyactiv-X is able to operate efficiently across a much broader range of driving scenarios.

Environment: Why Not Just Drive Diesels?

While diesel engines traditional deliver good fuel efficiency, they tend to produce more pollutants than gasoline (which is more refined).
Further, diesel burns cooler. As a result, diesel engines warm up more slowly than gasoline engines. Because catalytic converters only start functioning properly after warm-up, more pollutants could be emitted on lots of short trips. Diesel particulate filters also need long drives to burn off and would clog up otherwise. These characteristics make diesel engines unsuitable for vehicles that are primarily driven in city (though they are excellent on long-haul trucking).
Skyactiv-X combines the best of both worlds by bringing diesel-like efficiency to gasoline engines.

Where Can We Get It?

Mazda has introduced one SkyActiv-X engine: a 2.0L inline-4 that produces 178 horsepower and 224 Nm of torque. It has found its way into the 4th Gen Mazda 3 and the Mazda CX-30.
Mazda has been awarded Gold at Edison Awards in 2018 for the breakthrough Skyactiv-X compression-ignition engine. 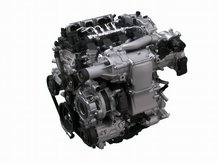 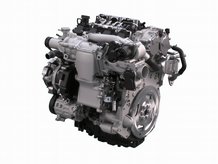 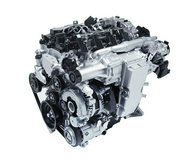 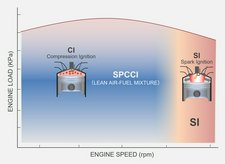 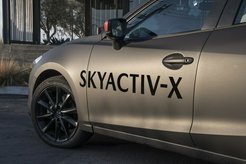 Mazda CX-30 is a compact crossover based on the fourth generation Mazda3. Available in both FWD and AWD guises, it is built to be lightweight to improve efficiency. Along with Mazda3, it features an optional SkyActiv-X compression ignition gasoline eng...
Compare
NEX score 69%

Mazda 3 is a compact vehicle in both sedan and hatchback form. In its fourth incarnation, Mazda offers the option of a 2.0L SkyActiv-X compression-ignition gasoline (petrol) engine. The world's first internal combustion engine of such sort, it impr...
Compare
NEX score 77%
Ads: Support our work by making purchase on the following sites. As affiliate of these vendors, we may receive a commission if you make a purchase with these links.
AmazoneBayAdoramaHP