Hyundai Elantra 5 (chassis code MD) is an affordable compact sedan in production from 2010 to 2013, whereupon it received a facelift. It was available with a range of inline-4 engines that displaced 1.6 to 2.0 liters.
Compared to the Gen4 Elantra, the MD model finally got some interesting updates: New 6-speed manual and auto transmissions replaced the ageing 5- and 4-speed units respectively. Hyundai also refreshed its engine lineup, adding a couple of direct-injected engines.
Inside, the car became somewhat acceptably appointed. Outside, while the styling was still a bit off, at least it was no longer generic and boring.
Hyundai has made a good effort in aerodynamics, with a decent 0.28 coefficient of drag to show for it. 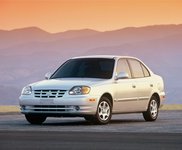