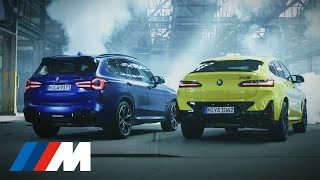 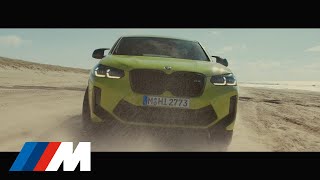 The facelifted BMW X4 M (F98) Competition is the high-performance variant of the facelifted BMW G02 X4 compact crossover. It is also the sloped-roof variant of the facelifted F97 X3 M unveiled at the same time.
Like the F97 X3 M, it features BMW's high-output S58 inline-6 turbocharged petrol engine paired to an 8-speed ZF 8HP automatic transmission, sending power to all wheels via the M xDrive AWD system with the driving dynamics of RWD.
As usually the case, the new X4 M Competition has a more aggressive exterior design compared to the base model. It comes with BMW M compound brakes and 21-inch staggered wheels as standard. Compared to the pre-facelift model, the facelifted X4 M has larger kidney grilles and a tweaked rear aprons and new paint finishes.
Inside, the interior has been revamped, with a free-standing 12.3" Control Display being the main user interface for the infotainment system. Modern driver assist techs are also available.

The facelifted 3rd-gen BMW X3 (G01) is a compact, two-row crossover. This mid-cycle refresh includes a range of cosmetic changes and technology upgrades, and some of its engines have slightly different outputs in order to comply with the new Euro 6d st...
Compare
Neoscore 57%NEX score 83%

Audi Q2 is a subcompact crossover built on Volkswagen's MQB platform and shares underpinnings with the Audi A3 Mk3, Volkswagen Arteon, and VolksWagen Golf, etc. For the facelift, Audi has revamped the exterior design and refreshed the technology in...
Compare
Neoscore 12%NEX score 67%

Lincoln Nautilus received a second facelift for the 2021 model year. Originally coming onto the market in 2016 as Lincoln MKX, the model received a mid-cycle update in 2019 and adopted the Nautilus moniker, dropping the naturally aspirated V6. The seco...
Compare
NEX score 63% 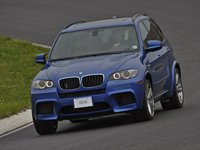 BMW X3 M F97 is a high-performance compact crossover in production from 2019 to 2021. It was available with two tunes of S58 turbocharged inline-6 petrol engine that displaced 3.0 liters. The first X3 to join the BMW M lineup, the F97 X3 M adds some r...
Compare
Neoscore 74%NEX score 67%

Like its predecessors, the third generation X6 M is powered by 4.4L S63 biturbo engines, making 600 hp in the standard model and 625 in X6 M Competition. The latter is a new addition to the lineup. Like the X5 to which the X6 M is closely related, the ...
Compare
Neoscore 81%NEX score 71% 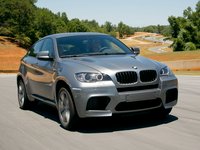 BMW X6 M E71 is the high-performance model of BMW's uglified X6 mid-size crossover. It was in production from 2009 to 2014, powered by a highly-tuned S63B44 hot-V bi-turbo engine that displaced 4.4 liters. In the beginning of the production run, th...
Compare
Neoscore 57% 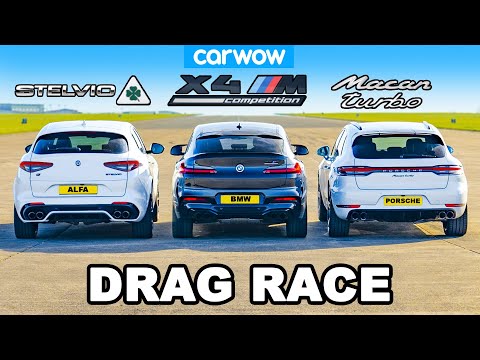 Sentiment Score 47%
Reviewers from autoexpress have found the following***:
The latest X4 M Competition is undeniably rapid and boasts grip and traction to rival some super-saloons. It's a strong technical update, with more performance and better tech on offer, plus bespoke M features for this halo model. However, it's still ultimately a compromised car, especially when it comes to ride comfort, while its X3 M alternative also offers more practicality.
Find the original article here.
Pros
Cons